Lab doors creak, and there’s dust everywhere. How long since since the last post? Who cares. Why now? Getting back the “mojo”, and that sort of thing.

The experiment is now ME. I have had not drawn much for some time, so the goal is to get the engines going again. The previous post is years old. There will be stories to tell, but I’ll bore you them with later. Re-training.

Slightly over a month ago, I started with warm up drawing exercises, doodles, and other drawings posted elsewhere. I chose direction following artist Salgood Sam’s “Making Comics” blog, specifically the post on Drawing Exercises. (Thank you Sam!). Turned out to be just the thing, hitting the right spots, and I got full value from it. It covers more than I think I can cover in just one post, but I’ll try my best to include everything. Topics visited for the exercises are drawing grips, hatching, line control, patterns, and other exercises. Some of the activities “bled over” others, so we will see how it goes.

It is a great workout, and has made me confident, and comfortable. I initially gave myself a week, but its been 5-6 weeks since, and I promised myself I’d share the progress. If you take these exercises on, please remember that whatever you draw does not have to be good at all. This is exercise, so you’ll see a “roughness” evident in the scanned images I will be sharing. Effort is what this is all about. Two notebook into it, I realize volume, and repetition is key for the warm up. I picked to use ruled paper in old notebooks, something I wouldn’t care much about, and that it wasn’t expensive. (My daughter’s old school notebooks did the trick. I think I still have a couple, and I am glad we didn’t throw them away. I’ll get real, blank page sketchbooks at some point, but burning through pages like this would be kind of wasteful for nicer blank pages).

So here we go. (NOTE: These are retouched scans from the ruled notebook, and I’m adjusting to make the drawing lines darker. There’s a lot of “show-through from other notebook pages worked on, and of course, some “indentation” that embosses the pages from previous pages on to of them. Yes… its a mess, but I’m just practicing, not being too neat and clean) .

Minding the “grip” recommendations, I started with hatching practice. Picked on some standard ones, and made some of them up. One always gets caught up with the resulting textures, and the temptation to “work them over” is always there, so you’ll see some attempts to shade, etc.

Next, I had some practice with patterns and a bit of shading (mixed pencil and pen/penbrush, nothing fancy, just exploring )…

Here are some that are more pen than anything else (I like ink).

Next, there were plenty of “line” based exercises. There’s the classic practice of drawing a straight line, over and over, but that’s like doing calligraphy, or learning to write long-hand… lots of repetitive stuff. I’ll just focus on the non-repetitive exercises, like the “single line” contour line drawing (blind or otherwise, you’ll see). That was fun to do, and it feels like you are solving a puzzle or maze. A friend of mine posted some “etch-a-sketch” pics the other day, and that’s exactly the “thinking” behind it, only that when it is free-hand, you go in any direction, and there’s little hints where the “connections” are made to keep the line going. The first one was a “blind” contour line of some “amazon device” you may recognize. That was horrible, but doing it blindly is still fun. The others were mostly carefully done, not lifting the pencil, except for some, at the end, where I “worked them up” a little, but not much… there are faces, plant doodads, and the corner of a piece of furniture… oh, and some doodling thrown in.

Following that, some “shape shading” with hatching exercises that were very entertaining.

And last, but not least, exercises with sort of “organic” shapes, and shading them. However, light and shadow became a focus here. Figuring out how light hits an object, and the shadows it casts was a separate trip on itself. I mean, one can guess, and have that guess be adequate, which you have leeway with in art, but I got all worried about it, and did some searching on one-point, two-point, and three-point perspective, on the side. I posted some of that work elsewhere, and even drew some buildings, corridors, etc, spurred by this part of Sam’s exercises (and with help from Sam’s guidelines and references). It turns out vision is a funny thing, and its all in the ever-changing perspective. Even found some optical illusion drawings I’ll be trying out later, but for this post, its all about how I started warming back up to my old drawing habits, and how Sam’s post and guidance helped so much. I can’t think him enough for sharing those exercise tips.

Back to the last part of this post (I thought it was going to be a multi-part thing, and it could be, but there’s not that much time when you want to draw the next thing, right? 🙂

Here are some organic shapes, based on Sam’s suggestions. Some of them are also “worked over” but they reflect the idea of how light hits an object. Don’t mind the “bleed through” images please (if you look close enough you’ll see my attempt at a little “Rick and Morty” 🙂 ). And of course, I know… cleanup lacking. I darkened lines/contrast to get as much of the pencil as possible. I will learn better imaging habits soon enough.

So, again, thanks to Salgood Sam… here’s the exercise link again – http://makingcomics.spiltink.org/drawing-exercises/

And that’s it for the re-opening post. I used to post about “experiments”, and will continue to do so (tools, process, etc)… of course, I’ll take suggestions, comments, etc. Happy to hear from you, don’t be shy!

Finally, for those still “subscribed” to this blog, and finding an unexpected notification in their email. Missed you! I hope life has been good to you. Chime in just to say hi.

Time for basics. The year started with “Gesture Line” as a topic in the Tuesday Sketch. The experience turned out to be a mini experiment. Adventures looking for a gesture line.

I thought I had gesture lines down. Mine were recognizable as such by my peers, a long time ago! The hare took a nap, eh? I give you a bit of my search for the elusive gesture line. Should be the first thing you see, right? 🙂

So I picked a reference image of a lady in a courtsey pose. I suppose I could have picked a pose with more obvious gesture lines, but here we go. If you’re wondering, its from Stephen Silver’s Pose Book app.

Some initial unfocused attempts at finding a gesture line.  I used a Tombow brush pen to throw myself off. Finding more shapes than lines, eh? Focusing.

Some of these lines could be mistaken for gesture lines. Loosen up, and the lines start to make sense. Going for “flow” or visual “action”. The pose was strange, so I came up with a few lines that I think can hold it up.

And here they are. For some reason the shoulders seemed like a good starting point. And of course, the crown of the head starts one main line. The crossed legs complicated things, making this an awkward balance for the figure. I think this is how it goes to the Tuesday Sketch… very very rough. I’ll finish something off of these lines soon.

My lesson: Practice your basics frequently. Better to be in shape when you need it.

Have a great art time, and thanks for dropping by! 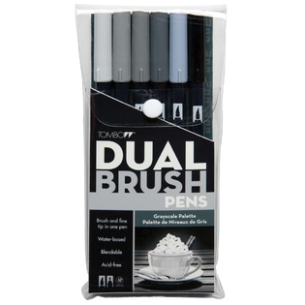 This is a “Pen Experiment” I suppose. Regardless, there is reason enough to post as such! I was very happy to receive a Tombow dual brush pen set (6-greyscale) to play with! These pens have both brush & micron-like tips, making them handy to flip and change while inking. Here are some inked sketches and images.

By The way, these are water-based ink pens. The ink, I find, may bleed if you lay it on thick, and even if up close (two different shades touching) it may bleed together. Of course, you can smudge the ink together as easily.

This is the original fish (posted prev?) was with a micron, or fountain pen. I used more shades. Inking black was satisfying (the eyes on the candy creature below, etc), but the shades were good texture.

A bigger version of that “view fish” or “ufish” organic sub thing. It was first printed with photo-blue right on sketchbook paper, which then got the ink brush/pen treatement. 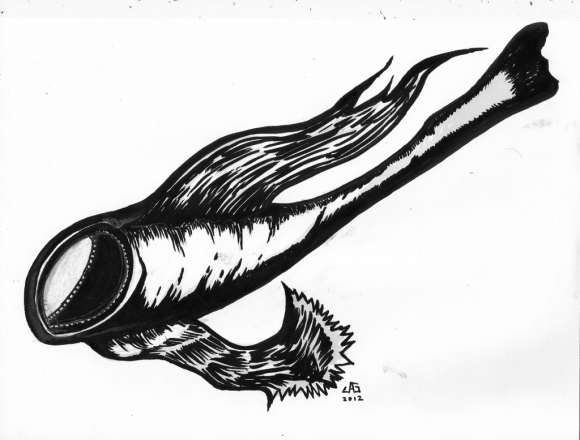 And here are The Brothers. Also done with Tombows. You can still see the photo-blue. LOL The heads were from another sketch, also for the 30 Character Challenge.

Oh yeah, the bottom line? I like alcohol based inks and how the dry. This water based ink dries quick enough to use, and not mix if you are careful. I suppose its good for mixing with water colors. That’s an experiment worth pondering.

Hope you liked it, thanks for visiting, and have a great art time! 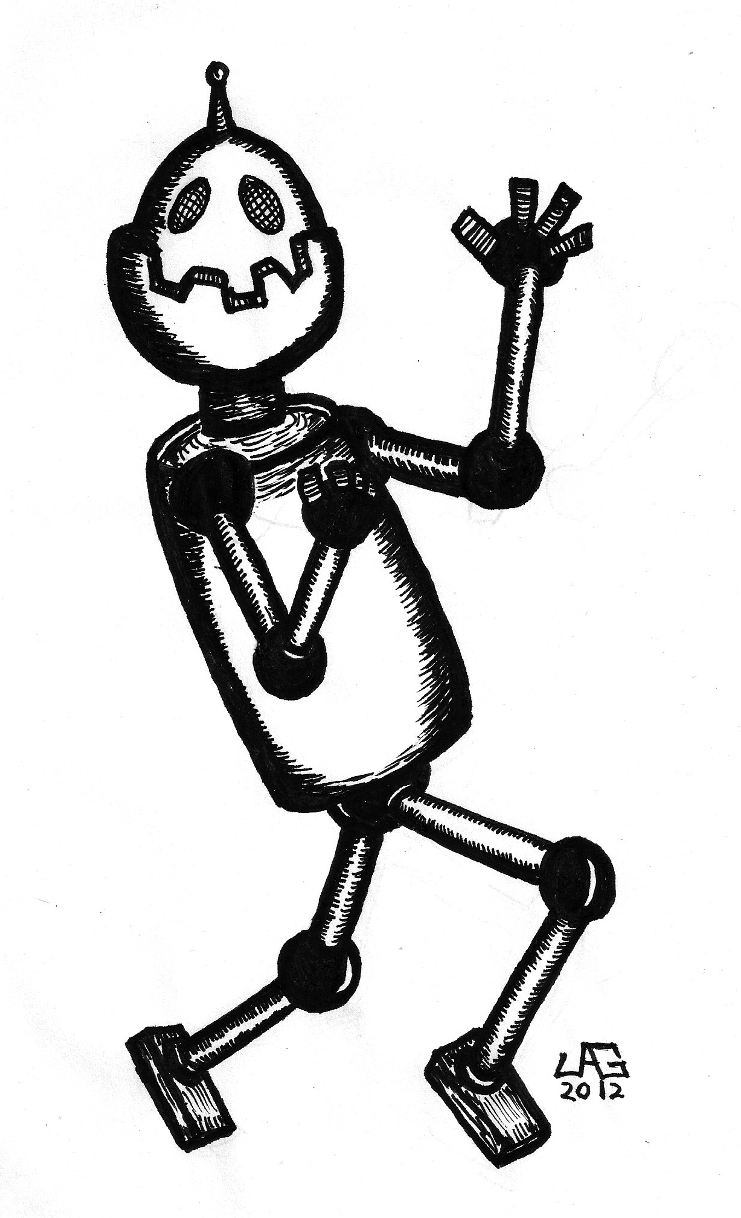 Broke out the old set of drawing dip pens. My wife was going on about how she got to sand her fountain pen tips and made them write smoother. I tried them and noticed the difference. She has 6 or 7 fountain pens now,, and she is really enthusiastic about with new found hobby.

I asked her to sand my drawing ink tips, but I was impatient and did it myself. After sanding and cleaning, I printed a “photo blue” version of one of my “standard” subjects to try out the little rascals. As you may see, lack of practice shows. That’s 6 to 8 months w/o dipping ink. Not that I ever practiced that much. The thick lines are a tell-tale sign that I covered mistakes. Getting used to the steady and straight strokes was kind of hard at first, but by the end, I was closer to the motions and angles. With a brush, you sort of stroke away from yourself. But with a dip pen, a stricter angle and motion is required. Simply put, there is only one direction that you can use to draw with these tips, and the angle is strict if you want a steady ink line. I combined strokes to the side with strokes toward myself to get what I wanted (after getting used to it, of course). I started wider tips, and finished with narrow ones. I also used regular copier paper, which came close to ripping in the solid black areas. Thankfully, the ink dried quickly, and I was lucky.

Anyway, it was fun to sit there, and patiently dance with the line that slow dance the ink makes you do. As well, that India drawing ink sure dries up fast. Something that helped avert smudge city. I hope you like this. I’ll try to get more experimental with my dip ink drawings in the future, but for now, it was a good experience, and a reminder that there are all kinds of tools out there to draw with, and you can make them do what you want. Oh yeah… robot says hi! Thanks for dropping by, and always have a great art time.